As I previously reported, after returning from my journey on the Camino I sent a letter to three ministries in the Government of Spain raising issues that I had noted as I walked the French route of the Camino. My letter let the ministers know that I planned to publish my letter, and any response I received to that letter, on this blog.

My  last post carried the first response I received. As I wrote in my comments about the letter, it was a cordial interim response that did not address any of the issues I raised but rather just informed me that my letter was being forwarded to another office.

Sometime later, I received a second (undated) letter, this time from Amparo Hernamperez Martin, also in the Ministry of Development.  Below is my informal translation of that letter, followed by a copy of the actual letter.  Please take a look and see what you think. Are any of the issues I raised in Chapter 25 of my book addressed? 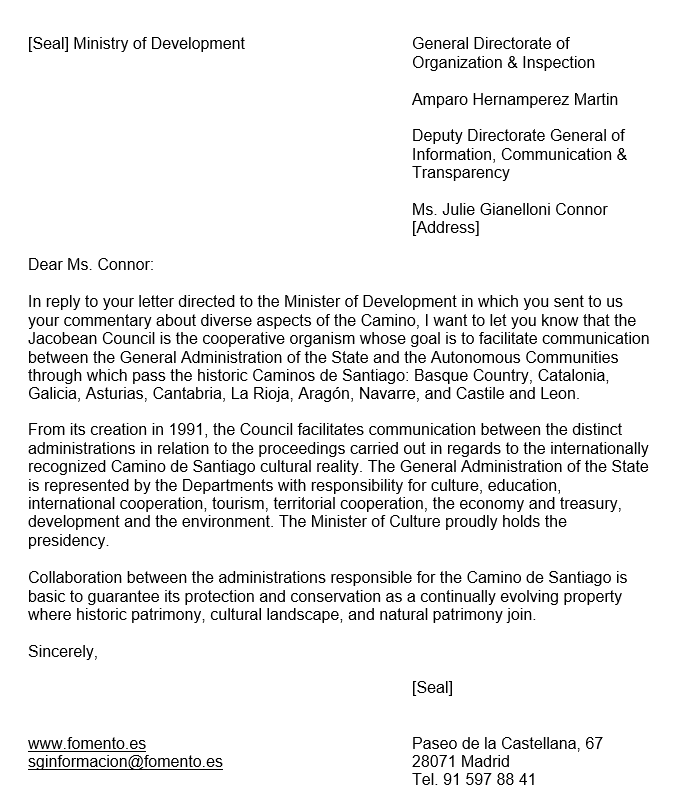 Here is my thinking about this second response.  In my letter to the three ministries, I informed them that I had asked the Spanish Consulate in Houston which Spanish government office was responsible for the Camino. The Consulate was unable to direct me to a specific office, saying that the responsibility for the Camino rests with the various Spanish provinces through which the Camino passes. Since the Consulate could not identify the specific ministry to which to direct my letter, I sent it to the three most likely responsible ministries.

In this response, Ms. Hernamperez Martin identifies the organism that coordinates actions on the Camino, the Jacobean Council.  According to Ms. Hernamperez Martin, the Council includes representatives of nine Spanish provinces and eight federal ministries.  Every meeting must be quite a gathering, with 17 principals and, no doubt, their deputies sitting in second chair! The size and composition of the Council reminds me of some coordinating meetings I used to attend in Washington–good for sharing information so that everyone keeps informed, but not so good for taking needed action. Ms. Hernamperez Martin also clarifies that the Minister of Culture chairs the Council.

As to the issues I raised in my letter, none are addressed. After receiving this letter, I was left with a number of questions. If the Minister of Culture chairs the Jacobean Council, why is neither the Cultural Ministry nor a representative of the Council answering my letter, but rather officials in the Ministry of Development? Will there be a further response, specifically reacting to my observations, suggestions, and comments? What sorts of actions is the Jacobean Council undertaking to improve the Camino the pilgrim experience?

What are your thoughts about the responses of the Spanish government so far?